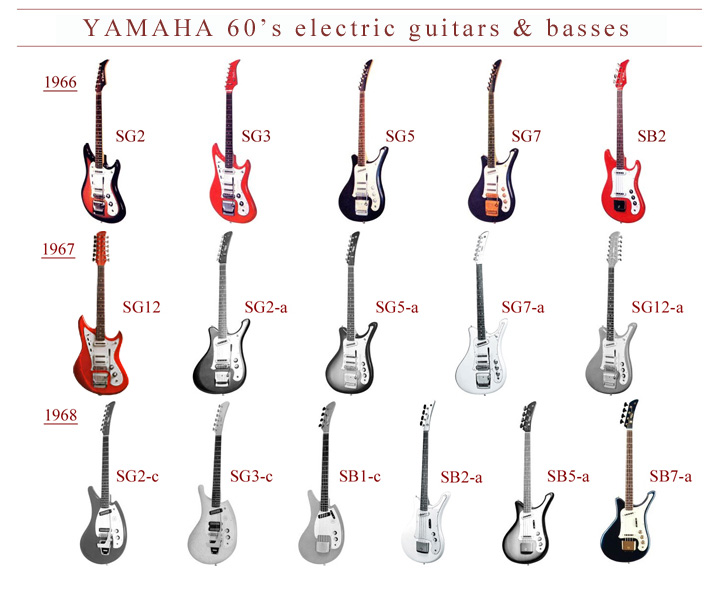 These guitars from the 1960s obviously have some fairly radical shapes as well as some very interesting features. Excluding the bass guitars they fall naturally into 3 ranges. The shapes owe something to the Mossrite guitars at the time. There was some input from Takeshi Terauchi a surf guitarist who was very "big in Japan" he played Mossrite guitars but later came to have several signature models of a similar shape to the SG A models from 1967. These are the TBJCST, TBJCST2, BJ Pro and BJ12. All these are covered on my Rare and Unusual pages.
Link Wray played an SG2

I am going to deal with them in 4 groups the first, second and third series and then the 12 strings separately to try to keep the pages to a reasonable size.
I should say at the outset that there is a whole lot of information missing on these and it isn't easy to find details from that long ago. What catalogues exist are pretty vague and the archives don't say much.
A bit of general info on the pickups, these don't have height adjustment screws they are mounted on some type of foam. There are suggestions in one or two places that the neck radius is 7.25" but the bridge is 12" radius.

Prototypes
It is known that 2 prototypes were built in 1965 and feature in some Yamaha literature. I don't know how many were produced or if any were ever sold. There was an SG and an SG1

This seems to complicate the official Yamaha version of events which is.
The first electric guitar made at Hamamatsu was the GSX33B the famous red guitar now still at the factory in Japan. From this came the S201 and S301 which was the first name for the SG2 and SG3. Yamaha released the SG2 and 3 as the S201 and S301 in April 1966 and changed the name a month later.
This doesn't explain where the SG and SG1 prototypes fitted in.

We have SG2 SG3 SG5 and SG7 The 2 has 2 pickups the 3 has 3 pickups and the 5 and 7 (no it doesn't work like that) have 3 pickups. The first two have the elongated upper horn and the second two an elongated lower horn. There are some other differences as well.
Lets start with a comparison of specs with some large gaps in the information.
The SG2 and SG3 were the first electric guitars to be marketed by Yamaha.


*The archives describe the necks on the 5 and 7 as "side cell pasted" I don't know what that means, there is an advert for a 5 that suggests that the neck is Mahogany it certainly looks like Maple to me. Maybe they mean the fretboard but again that looks like Rosewood.
Controls
This is an area where these guitars are different to say the least
SG2
has two circuits (rhythm and lead) so you can set up two different tones on the guitar and switch between them,. The volume and tone controls on lower part of the guitar work in the usual way for the main circuit, but the switch nearest the point of the upper horn allows you to select the alternate circuit which has separate volume and tone “wheels” just above the neck pickup. There is also a 3 way pickup switch
SG3
Works in a similar way but with the addition of a blender switch to combine the two bridge pickups in whatever way you like.
SG5 and SG7
Don't have the 2 circuits system but feature 1 volume 1 tone a 3 way switch plus a blender control for the 2 bridge pickups.
Pickups
Yamahas literature describes these as having new anisotrophic ferrite magnets in order to ensure a consistent tone at all volume levels.
I assume that all three SSS models have the same bridge pickup arrangements here is a comment from a guitar magazine review for the SG3
Those are actually two single-coils in that humbucker-looking housing, but they are differently designed. The one closest to the bridge has an extra magnet under the coils and then a metal bridge plate under that. The bridge pickup is just meaner and more aggressive than the other ones. It's a cool idea when paired with the roller control on the upper bout.
The neck pickup on the 5 and 7 is angled not so on the other 2
Neckplate On the 2 and 3 and probably on the 5 and 7 the neckplate is a cover it comes off and allows access to the truss rod adjust and to the screws actually holding the neck to the body.
Headstock
The SG2 and SG3 have completely different shaped headstocks from the 5 and the 7 as can be seen in the pictures. Both feature a tuning fork medal it isn't a logo it is an embedded piece of metal. They also have a unique string tree that covers 3 strings not on the SG7 for some reason. The tuners are described by Yamaha as "pincushion"
Nuts
No idea of the nut width of any of these but similar moderner models are 41mms the SG2 and 3 have chrome plated nuts, the 5 a plastic of some sort nut and the 7 a gold plated metal nut
The SG7 is a pretty expensive guitar and I can't see much to justify the difference between the 5 and the 7 maybe different woods are involved.
Some comparison pictures. 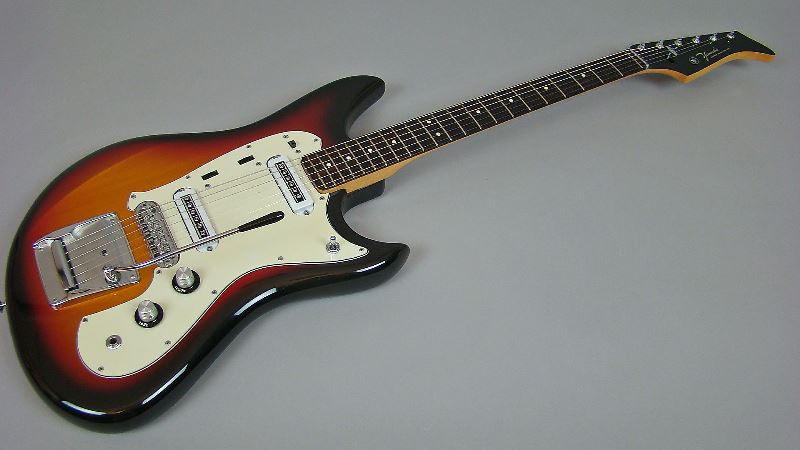 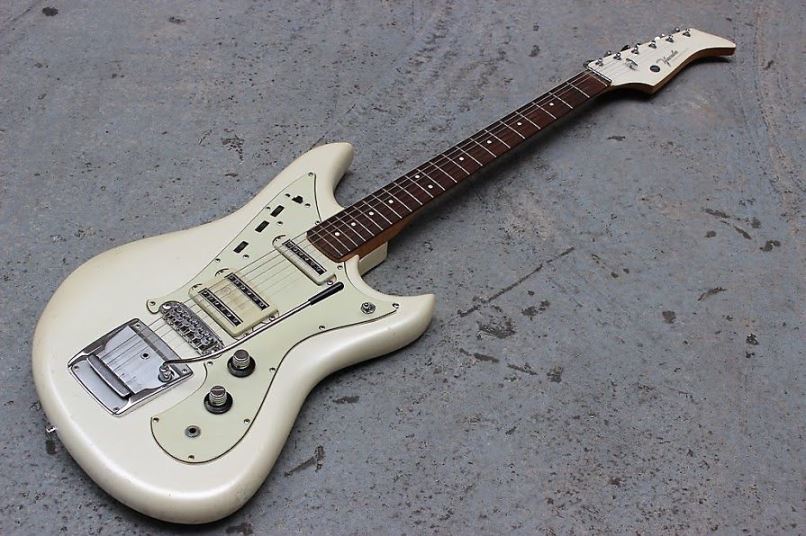 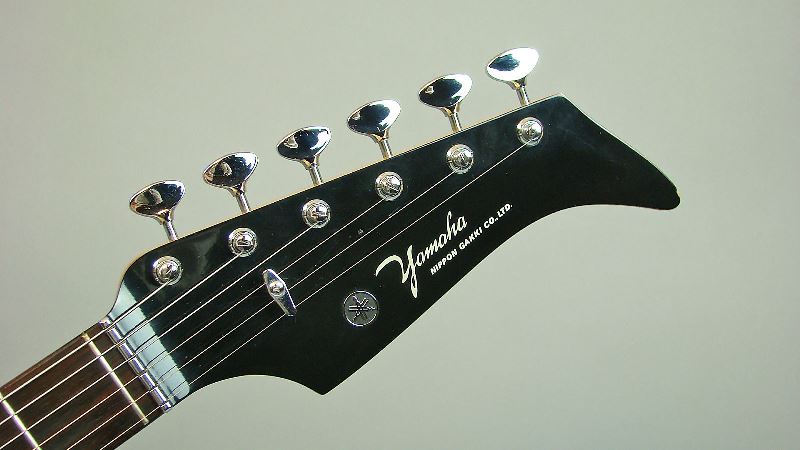 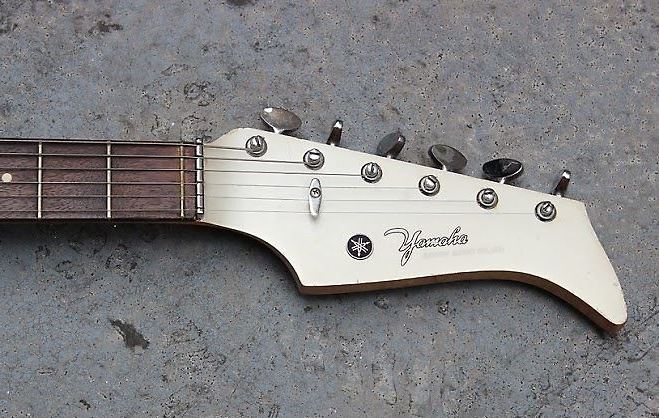 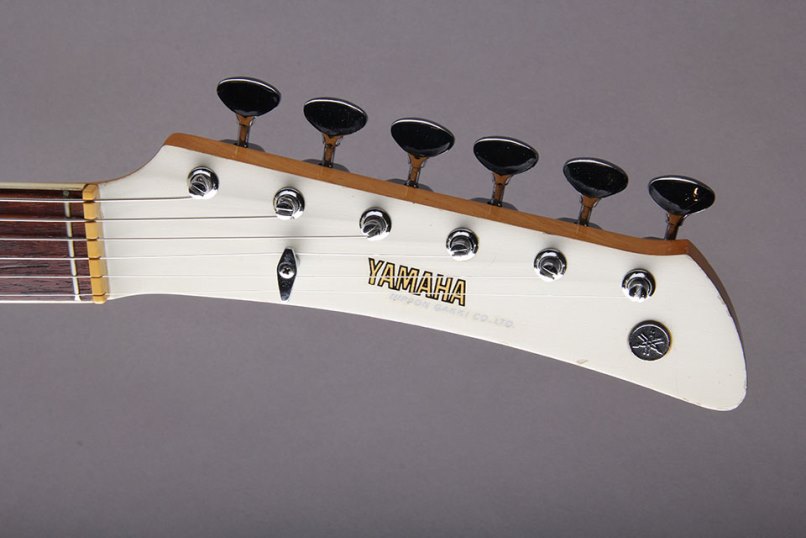 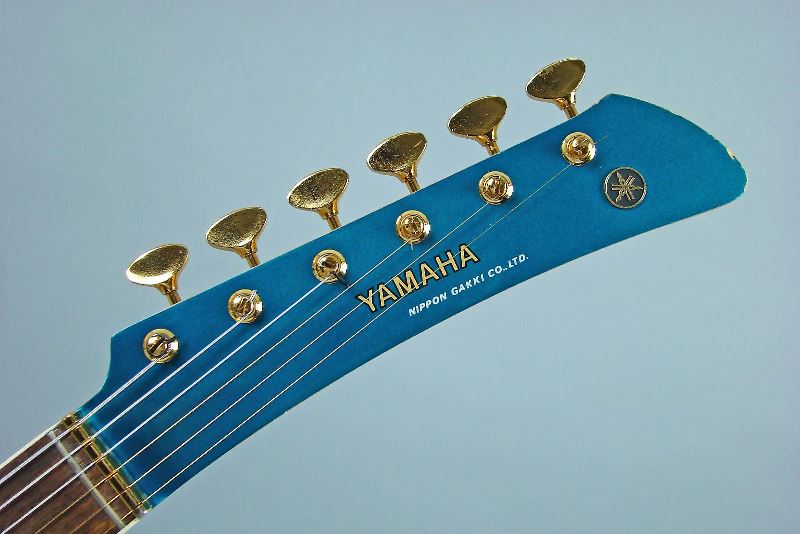 The headstocks again in order and the pickups of an SG7 the others are the same but chrome. 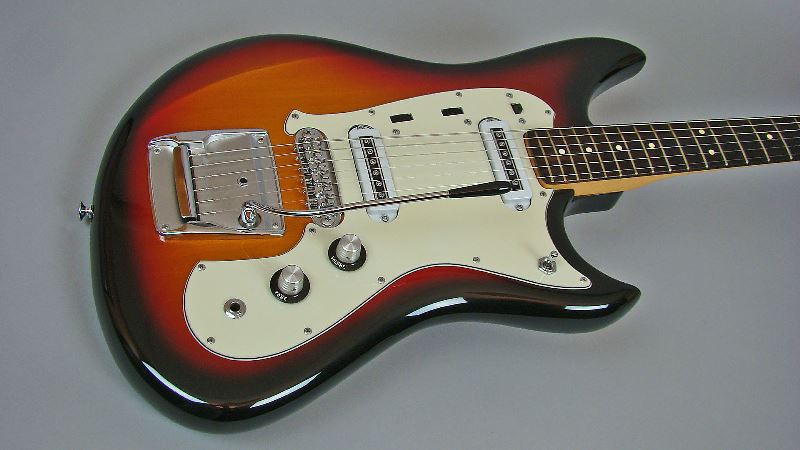 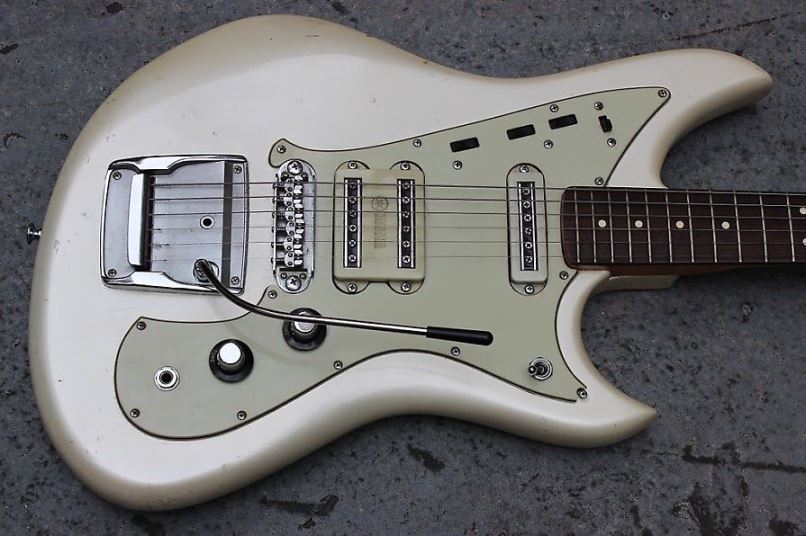 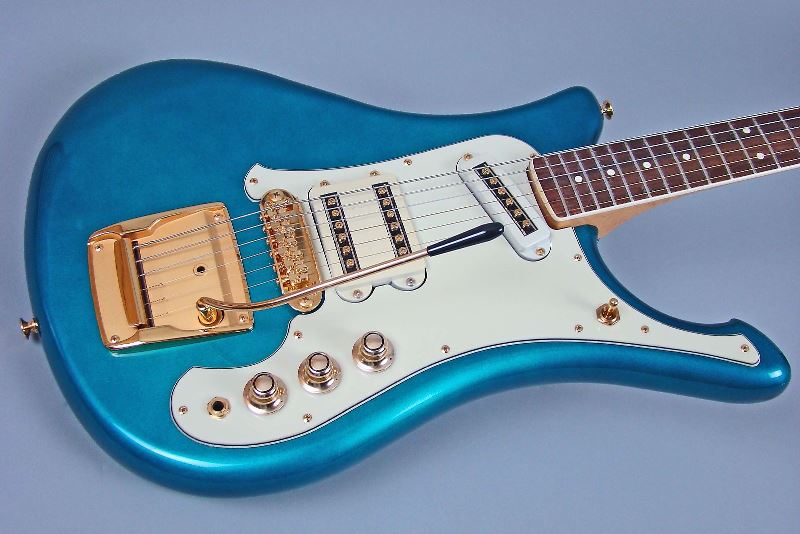 The bodies in order showing the different controls.
You can also see a hole in the trem. Stick a screwdriver in and you can raise and lower the trem.

This is what it looks like when you remove the neckplate

A note from Sean "TheSupposedStringMeister" see his website in my links
Even in the short period of time that the SG-2 was made (less than 2 years) they came with some differences. The most obvious one is the lettering on the headstock: Cursive versus straight. Not sure in which order that was done. The other difference that I am aware of, is on the roller volume and tone wheels. The earlier ones did not have any writing on them while the later ones have "volume" and "tone" printed on the wheels.

As the straight script is on the later SG models my guess would be that the cursive is the earlier.


Next on to the second series.
Second Series
Back to top